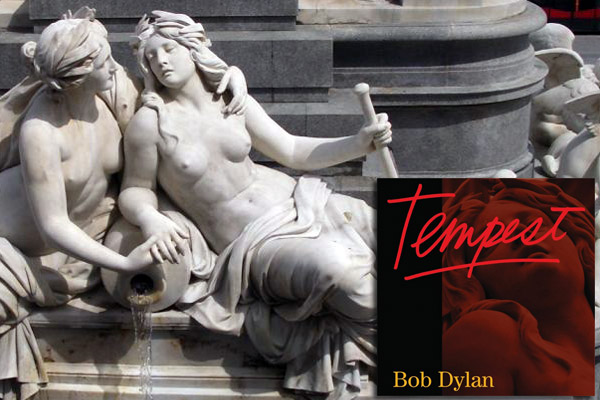 The release of Bob Dylan's latest and 35th studio album not only marks his 50th anniversary as a recording artist but also raises a few interesting questions, probably more than any other Dylan album before.

First, the parallels to Shakespeare's final play "The Tempest" which dates back to almost exactly 400 years ago, has been discussed before. In one of his rare interviews, Dylan told Rolling Stone magazine that the two titles had no connection at all, "Shakespeare's play is called 'The Tempest"...well...Dylan somehow seems to be attracted to bad weather, all the way from "A hard rain" trough the "Rolling Thunder Revue", up to his new album.

Dylan cover artworks have often been discussed and criticized, but when the blurry portrait of "Blonde on Blonde" and the painting on "Self Portrait" from today's point of view have artistic quality, "Tempest" disappoints simply because it looks like a quickly made draft with bad typo, design, and photography. Even twenty years from now my opinion won't have changed on that. For the past three albums known photographies have been chosen for the cover (by Dylan himself? by Columbia? by Columbia's AD?), will this be the beginning of another photo trilogy of homemade holiday snapshots? One can only hope for a new version.– On bobdylan.com a text overlay to the product photography of the Deluxe box set reads "Not final poster artwork" (September 4)... Such much on the technical quality of the cover artwork, but what about the content of the picture? It shows part of a female statue on the "Pallas Athena" fountain in front of the Austrian parliament in my hometown Vienna. To be honest, I was more than a little surprised when I found out about that. Why this particular picture? I have no clue, if you know more on it please feel free to post your message below.

Now let's step forward to what matters most: the songs. When "Like a Rolling Stone" was released as popular music's very first single with a running time of more than six minutes, it was revolutionary. Since then many things have changed, but singles still only very rarely are published having more than four minutes length. Dylan on the other hand obviously still enjoys the epic song format, like "Sad-eyed lady of the lowlands" or "Hurricane" most of the new tracks range between seven and fourteen minutes in length. The longest song, "Tempest" draws an extensive musical picture of the Titanic disaster of 1912, wrapped in a slow waltz. The event took place exactly 100 years ago.
In another epic song "Tin Angel", Dylan borrows the title from Joni Mitchell and tells a murderous ballad where three lovers all end up dead in the end. Death appears in many other lines of Dylan's dark new work: "My day is definitely gone", he sings in "Soon After Midnight". "Duquesne Whistle" has been chosen as the first single off the album, a swinging love song of a man facing the end of his days ("You're the only thing alive that keeps me going"). I've posted the controversial video before.
In "Roll On John", Dylan remembers John Lennon and quotes several Beatles songs ("I heard the news today, oh boy"). "Pay in Blood" stands out as the album's rocker. In opposite to the other generally slow tracks, it's one of the songs that rocks the most. It draws musical similarities to "Gonna change my way of thinking" and "Neighbourhood Bully" where Dylan mumbles "I'll pay in blood, but not my own."