The upcoming compilation album "The Lost Notebooks of Hank Williams" will feature newly recorded completed versions of song drafts rescued from notebooks by Country music legend Hank Williams who died in 1953 at the age of 29. As Rolling Stone magazine reports, the record was originally conceived as a Bob Dylan project, but evolved into a multi-artist tribute with 13 artists performing 12 previously unheard songs. Along with Dylan ("The Love That Faded"), the tribute also includes contributions by his son Jakob ("Oh, Mama, Come Home") and Levon Helm ("You'll Never Again Be Mine"), former member of The Band. 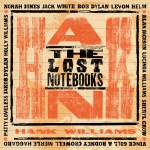 Michael McCall from the Country Music Hall of Fame and Museum, who wrote the liner notes, observes, "These new recordings tap straight into the soul of man. This is songwriting at its most artful and most powerful."

The album will be released on October 4, 2011. It's only the second ever album to be released on Dylan's Egyptian Records/Columbia, the first was "The Songs of Jimmie Rodgers - A Tribute" (1997).