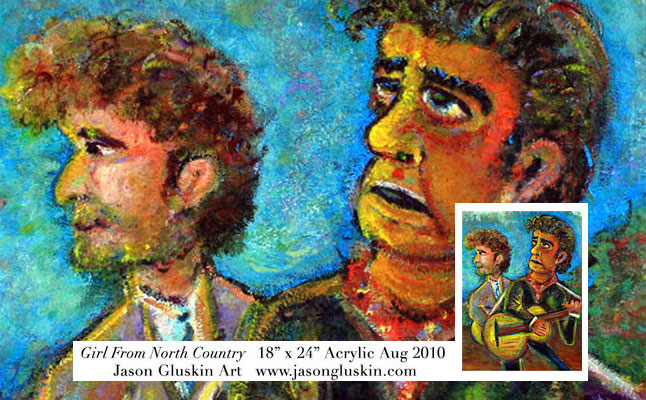 New York artist Jason Gluskin, recently produced a tribute to Johnny Cash and Bob Dylan, dubbed Girl From North Country, acrylic 18” x 24”. Inspired by the 1969-70 era when the two collaborated, the painting showcases Cash and Dylan playing music together in the American countryside.
“I’ve been listening to a lot of Johnny Cash and wanted create a peaceful, country-filled landscape… something Americana in style.” said Gluskin. “Then (Dylan’s album) Nashville Skyline came back into my music rotation. Even though it was probably only a brief time the two worked together it must have been a magical moment. The harmony of their voices is simply riveting.”
Jason’s painting reflects his impressions of Rock, Jazz, Blues, Pop, Country, Punk and more. Some compositions are representations of real musicians, including one titled, When I Paint My Masterpiece featuring The Band with Bob Dylan. It was profiled in The Bands’ bass player Rick Danko’s website. “Music fills my world. Certain songs or albums will strike a chord or emotion that I need to project visually.” Gluskin paints from video footage of his favorite musicians to capture their full persona. You can visit the artist's website at www.jasongluskin.com.

If you are interested in Dylan's recording session with Johnny Cash, you might want to check out the Bootleg "The Dylan/Cash Sessions". The only officially released song from these sessions was "Girl from the North Country", you can find it on 1969's "Nashville Skyline".