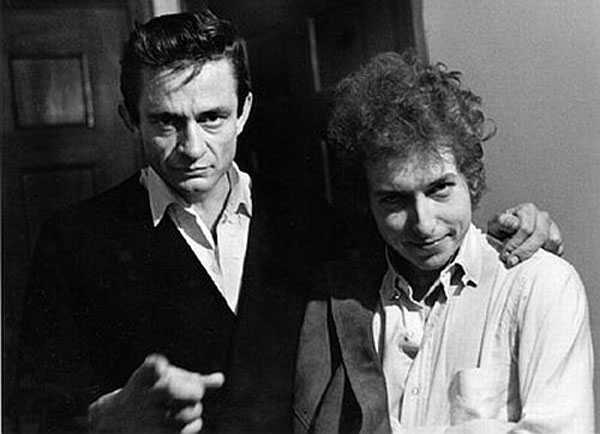 "Johnny was and is the North Star; you could guide your ship by him - the greatest of the greats then and now. [...] Listen to him, and he always brings you to your senses. He rises high above all, and he'll never die or be forgotten, even by persons not born yet - especially those persons - and that is forever."

Bob Dylan had first met Johnny Cash at the 1964 Newport Folk Festival. In 1969 Dylan was guest at ABC's "Johnny Cash Show". In the same year they held recording sessions on three different occasions at CBS Studios and at the Ryman Auditorium, both in Nashville. No new originals were among the recorded tracks, it was both Dylan and Cash songs performed as duets, and a few traditionals and country jams. Unfortunately only one song of the recorded songs was officially released, on the album "Nashville Skyline" in the same year, 1969: "Girl of the North Country".

The complete sessions appeared on the Bootleg release "The Dylan/Cash Sessions", a true collector's item. Here's a video of "One Too Many Mornings" from these sessions: