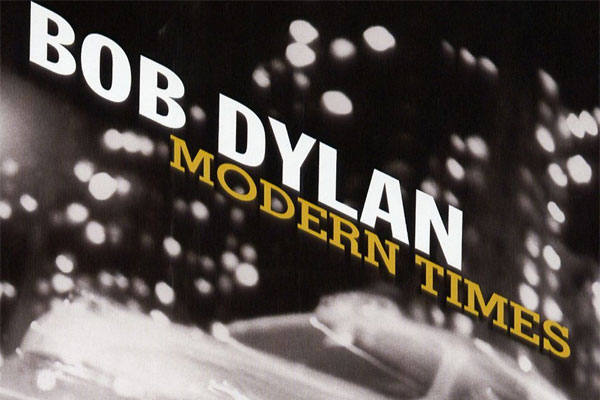 Every once in a while we get to witness the birth of something very special: a new Bob Dylan album. Finally, after five long years of waiting, Dylan's 31st studio album "Modern Times" is released in August 2006. For the first time Sony Music published a 5-minutes MP3 album sampler to download for free about a month prior to the release date. "Modern Times" was recorded with his current touring band and produced by Jack Frost a.k.a. Bob Dylan himself, just like most of his recordings of the past 10 years.

When listening to the album for the first time, its crystal-clear bluesy sound will probably remind you of "Love & Theft", sort of a Part 2 one might think. The 10 new songs in 63 minutes are a brilliant, intelligent and nostalgic musical journey through Blues, Jazz and Gospel.

"Thunder On the Mountain" is a great opener, a piano rocker in the tradition of "Highway 61" including a surprising lyrical reference to R&B star Alicia Keys. "Spirit On the Water", slows down the tempo to a jazzy piano bar blues love song: "I take good care of what belongs to me".
In "Rollin' and Tumblin'" Dylan borrows from Muddy Waters, you might have heard a version on Eric Clapton's Unplugged album, but Dylan extends the lyrics free-style: "Some young lazy slut has charmed away my brains".
The beautiful ballad "When the Deal Goes Down" could very well be a track from "Time Out Of Mind".
"Someday Baby"..."you won't have to worry about me any more" –another great mid-tempo rocker– leads to "Workingman's Blues #2", one of the most beautiful songs Dylan has written in the past years. Performed on acoustic guitar, it would have fit onto "Blood On the Tracks": "I sleep in the kitchen with my feet in the hall, sleep is like a temporary death." "Beyond the Horizon"..."at the end of the game every step that you take, I'm walking the same", a spiritual confession for love waiting on the other side. A religious love song as a footnote to life.
"Nettie Moore" brings back the mood of "Oh Mercy" with its musical quotes of "What Good am I?" and its dark lyrics: "The sun is stalled, I'm standing in the light, I wish to god that it was night."
"The Levee's Gonna Break" is the third mid-tempo blues rock song on the album. It might have been inspired by the hurricane Katrina catastrophe during which among many others Dylan's producer and friend Daniel Lanois lost his recording studio.
"Ain't Talkin'" is a remarkable close-to-nine-minutes long epilogue in the tradition of "Sad-eyed lady of the Lowlands" or "Desolation Row". Its lyrics are packed with mystical pictures. The fire within the raconteur is still burning, still he's not talking, "just walkin'": "Some day you'll be glad to have me around." And guess what, we already are.

Bob Dylan's new album again merges old and new music as a soundtrack for the lyrics of yet another late masterpiece. If you liked "Love & Theft", "Time Out of Mind" and "Oh Mercy", go out and buy "Modern Times". If you liked anything else by Bob Dylan, well then do the same. And if you don't have any Dylan recordings in your collection (is that possible?), now it's time to change that. Right now!