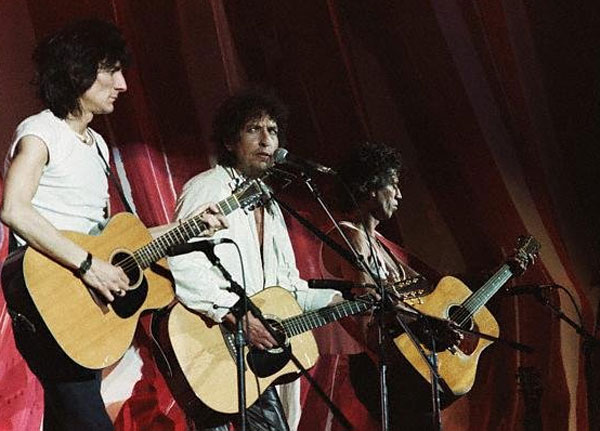 On November 8, 2004 –about 20 years after the legendary original benefit concert which took place on July 13, 1985– an official 4 DVD set was finally released. The DVDs have been produced by Bob Geldof's company, Woodcharm Ltd., and feature ten hours of concert footage, a documentary, as well as the music videos to the benefit singles "We Are The World" (with Bob Dylan) and "Do They Know It's Christmas".

The song "Blowin' In The Wind" with Keith Richards and Ron Wood has been included on disc 4. Their original set at JFK Stadium, Philadelphia consisted of two more songs, "The Ballad Of Hollis Brown", and "When The Ship Comes In" which both remain unreleased on DVD. Recordings from the original TV broadcast can be found on YouTube though.

To Bob Dylan enthusiasts, the acoustic performance will not remain in their memory as a highlight of Dylan's live history: It was rather weak, probably due to technical sound problems. As Dylan later stated, he could hardly hear anything from the monitor speakers, which made it difficult to play properly on the huge stage.

Apart from live performance, Dylan had been criticized for a statement he had made in front of a worldwide audience of more than one billion people:

"I hope that some of the money (..) maybe they can just take a little bit of it, maybe (..) one or two million (...) and use it to pay the mortgages on some of the farms and the farmers here, owe to the banks."

However, the inappropriate statement did inspire Willie Nelson to organize the Farm Aid charity concert series, to benefit American farmers plunged in debt.