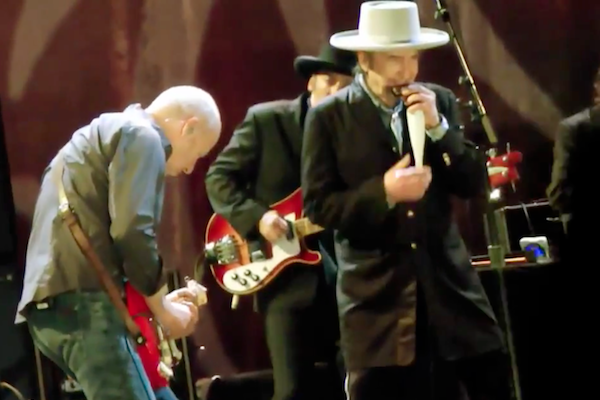 On November 21st Bob Dylan and Mark Knopfler wrapped up their 2011 European tour in London, performing a rare duet of "Forever Young" at the Hammersmith Apollo. Even though Knopfler had constantly joined Dylan's band on stage playing guitar, the fans had to wait until the last song of the last show of this tour to enjoy them singing a song together.
Mark Knopfler had collaborated with Dylan for the first time more than 30 years ago, playing guitar on the album "Slow Train Coming" (with the hit single and Grammy-awarded "Gotta Serve Somebody"), and producing his album "Infidels" in 1983 including the beautiful classic outtake "Blind Willie McTell".

The YouTube-user "cohenadmirer1" uploaded this nice audience video with sharp close-ups and excellent sound quality. Thanks, and enjoy!