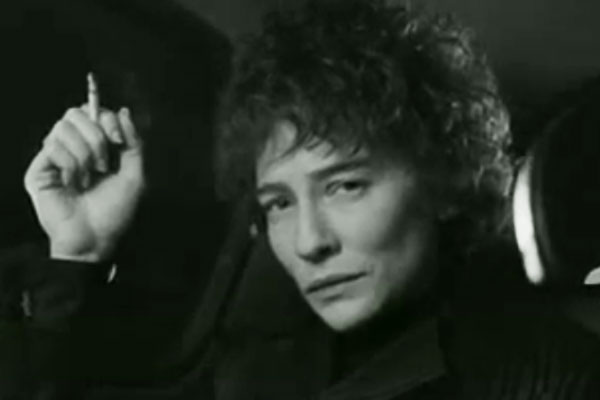 A clip of Todd Haynes' upcoming biographical Bob Dylan movie has leaked on YouTube. The 90 seconds long video features Cate Blanchett (!) in the role of Bob Dylan driving in a car with Mike Bloomfield in 1965, when Alan Ginsberg drives by for a short conversation. The clip was shot in authentic "Don't Look Back"-style B&W and you can even see the time code below.

UPDATE: The video has been removed from YouTube, so I've posted the official trailer instead.

The Harvey Weinstein production shows episodes out of Bob Dylan's life from the early 1960s onwards. Dylan is embodied by 7(!) different actors, including Cate Blanchett (1960s) and Richard Gere (1970s).
The movie is named after a song recorded in 1967, "I'm Not There" from the legendary "Basement Tapes". It will open in cinemas in autumn 2007.