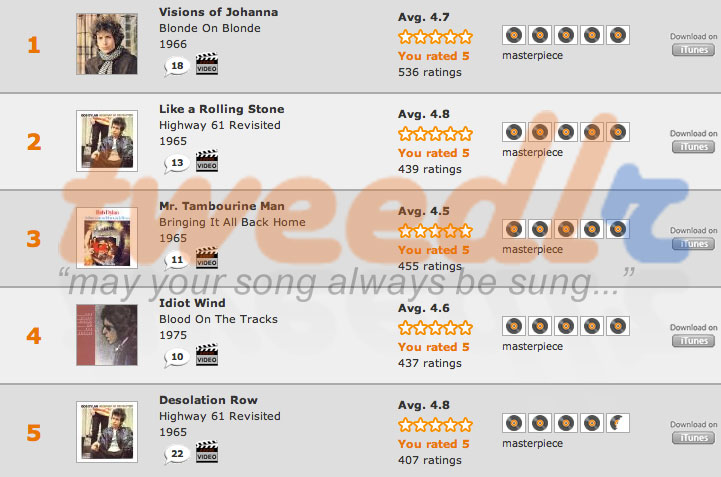 In December 2008 a new Bob Dylan song rating website launched its beta version: tweedlr.com - named after "Tweedle Dee & Tweedle Dum", the opening track on 2001's "Love & Theft" album. The main part of tweedlr is a rating chart of the Top 100 Bob Dylan songs on officially released albums. Each song can directly be rated on this list, where each user can once rate each song with a maximum of 5 stars. You also see the average rating and the number of people who already rated the song. Each individual rating is saved, so if you return to the site you will see your previous ratings. In case the song you're looking for is not in the Top 100 list yet, you can find it using the song search bar.
By clicking on a song title you get song details, where you can post a comment on that song.

Several hundreds of users have submitted their ratings and posted their comments on tweedlr.com so far, and it's already the biggest single Bob Dylan music rating community on the web. The site is still running as a beta version, so we're all looking forward to new features in the near future. Positively-BobDylan.com says: tweedlr.com is the website of the month!