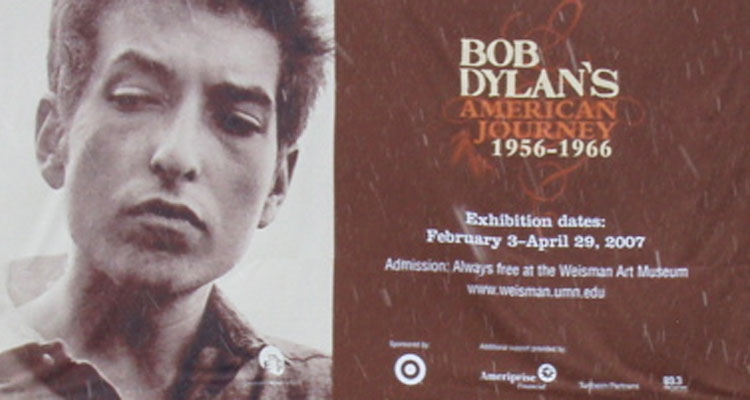 "Bob Dylan's American Journey, 1956–1966" is a new exhibition at the Skirball Cultural Center in Los Angeles more than 160 artifacts, including Dylan's handwritten drafts of classic songs, rare concert posters and a recording of his first concert, which has never been commercially released. It follows Bob Dylan from his Minnesota roots to his growing fame as a rock star. The presentation is complemented by a newly developed satellite exhibit, which offers a unique opportunity to experience the creative process. Visitors can simulate playing along with Dylan on keyboards, electric and acoustic guitars, drums and organs, as well as experiment with a mixing board on an authentic Dylan recording!

The Skirball Cultural Center is an affiliate of Hebrew Union College. Its mission is to explore the connections between four thousand years of Jewish heritage and the vitality of American democratic ideals. It features a museum, changing exhibitions, engaging music, theater, comedy, film, family, and literary programs in an architectural setting designed by renowned architect Moshe Safdie. Over 500,000 people visit the Skirball each year.