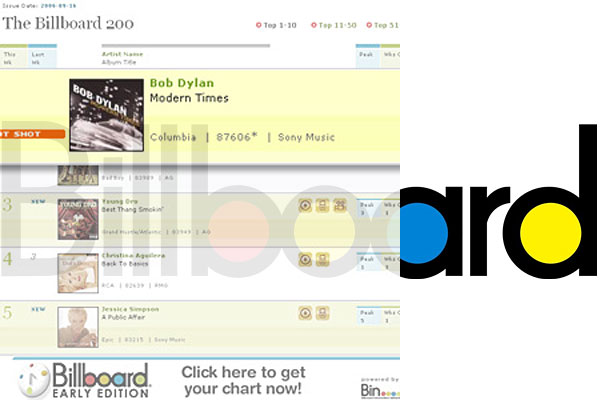 After an unbelievable 30 years Bob Dylan tops the US Billboard album charts again! His latest studio effort "Modern Times" sold more copies in the first week of its release than any other album in the United States. "We couldn't be more thrilled that fans have responded to it so enthusiastically by putting Bob at No. 1, which is where he belongs" said Steve Barnett, chairman of Dylan's Columbia Records label.
Internationally, "Modern Times" opened at No. 1 in many states including Australia, Canada, and several European countries.

It was way back in 1976 when "Desire" was his last album to top the Billboard Top 200, and only two other albums did the same - "Blood On The Tracks" (1975) and "Planet Waves" (1974).
Dylan's new album is the third consecutive Top 10 studio album after "Time Out Of Mind" and "Love & Theft", of which Rolling Stone magazine said that they "stand alongside the accomplishments of his wild youth."

The first single from "Modern Times" is "When the Deal Goes Down". The music video was directed by Bennett Miller ("Capote") and features Scarlett Johansson. Dylan also appears in a new Apple commercial for iPod/iTunes to promote the release of his new album.