What to expect from Bob Dylan live in 2014 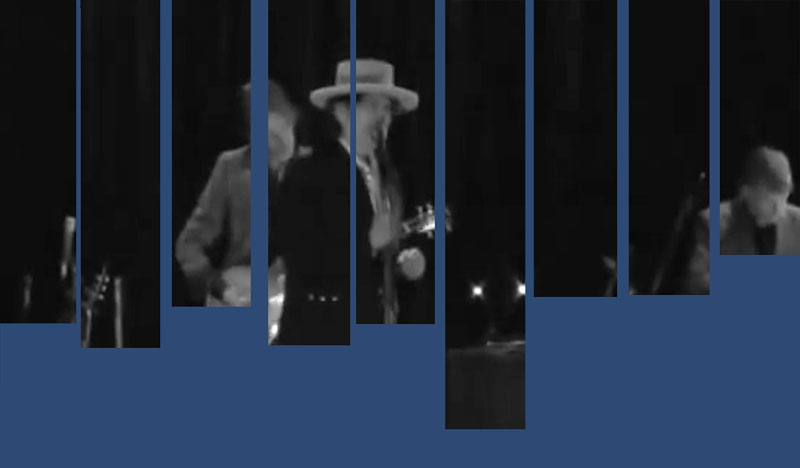 Bob Dylan more or less continuously toured the world during his past five decades as a performing artist. His most successful and critically acclaimed series of concerts included the world tour of 1966 at the peak of his "classic period", the "comeback concerts" with The Band in 1974, and the now legendary "Rolling Thunder Revue" of 1975 with a second leg ("Hard Rain") in 1976. The latter of which Rolling Stone Magazine called "one of the greatest Rock tours of all-time".
From 1988 onwards the number of concerts Dylan played each year drastically increased and fans created the name "Never ending tour" for this excessive touring schedule. 2014 the NET now has been going on for a quarter of a century and there's no end in sight. Instead of the usual Album/Tour-cycle most major acts seem to prefer, Dylan performs regardless of a new release. It even seems that he has to find spots in between his packed schedule to return to a studio for recording sessions. It's only convenient that Dylan has a reputation for "compact" and – as it seems – rather spontaneous studio work.

This year Bob Dylan's tour already led him to Japan and Hawaii (for the first time in 22 years), in about two weeks it will continue in Europe and then lead him on to New Zealand and Australia. Further dates are yet to be announced. In spring Dylan – who celebrated his 73rd birthday a week ago – played close to 20 concerts within one month alone. He's going to perform another 21 times in 13 different countries between June 16th and July 17th.

Are you planning to see Bob Dylan and his band live this year? Here's a couple of things you can expect:

1) A solid backing band: Dylan seems to have become comfortable in playing with the same pool of musicians during the past years. In 2014 you will revisit Tony Garnier (bass since 1989), George Recile (drums since 2001), Stu Kimball (rhythm guitar since 2004), Charlie Sexton (lead guitar since 1999) and Donnie Herron (pedal steel, mandolin, banjo and violin since 2005).

2) A consistent setlist: What surprised me a little about his spring dates was the consistency of the setlists. On all occasions the band started with the same four songs, "Things Have Changed", "She Belongs To Me", "Beyond Here Lies Nothin'" and "What Good Am I?". Also the encore always was the same: "All Along The Watchtower" and "Blowin' In The Wind". In between Dylan completely focussed on newer songs from the past three studio albums he recorded with his touring band (Tempest/2012, Together Trough Life/2009 and Modern Times/2006), with only two Blood on the Tracks classics thrown in, "Tangled Up in Blue" and "Simple Twist of Fate". Never before he played that many selections off his current album as this time around.

3) A singing keyboarder with a hat: During the last ten years of the NET apart from few rare occasions Bob Dylan ceased to play guitar on stage. Currently he plays the piano from the right side of the stage and takes center-stage with just his harmonica and microphone. Plus, he always wears this white hat you know.

4) A laid-back sound: One of the reasons the current setlist doesn't include the all-time greatest rock song "Like a Rolling Stone" might be that it simply doesn't fit to the new calmness of Dylan's new material. "Tempest" was packed with laid back tunes, even current interpretations of songs like "All Along The Watchtower" are hardly recognizable for the casual fan that has Hendrix's version in mind. We've heard all kinds of version, from Country to Reggae to Rock, but this time around it's more like jazzy jam session, perfectly matching the "Tempest" sound.

So much for this little preview to what you will most likely see and hear from Dylan soon. But then again, don't forget that there will also be a new studio album coming out this year, so who knows how and what will be changed for the European part of the 2014 tour, maybe we will get to experience a very different selection of songs then.